Let's do this without intro. Just say that Aldious released a new album on November 21. And now I will tell you what's interesting here. 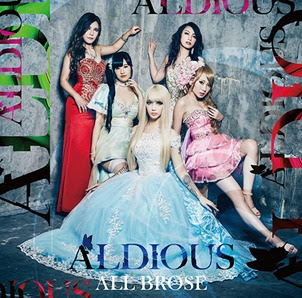 It's always difficult to make unambiguous conclusions when we discuss world-class musicians. But in general, if you try to say something unambiguous, you can say that the album looks interesting. Here is exactly what was expected from musicians of this level. But with careful listening it becomes clear that not everything is so simple.

I'm not even talking about a not very remarkable cover - Aldious has always had this bad thing. Overall album concept is difficult to understand. But there is a regularity: each track has a different composer. Also worth noting is the album structure. First and third tracks are negative in color, and the second and fourth ones are positive, as well as a slow intro in first track. I can not say that this is something brilliant, but it looks interesting. The most interesting idea is in song Monochrome. However, some parts of the general pattern and vocal parts resemble song of Galmet (forgot the song name). And when I found out who the author of this song (Sawa) was, I immediately understood everything.

Vocalist is bad again. Even for the last time, she managed to spoil everything. Not that I condemn Rino, but something more is expected from a professional vocalist. However, there is a diversity. But the main part of the diversity is the sound designer's ideas. Here you can hear very interesting tricks with a large number of tracks for voice, which are very similar to those used by Mari Hamada in her new release. Even I heard it in my cheap headphone for 30 USD.

Instrumental parts - there is something interesting here, but this is not very much. No, this time it was done without something brutal in the spirit of late Overkill (Yoshi’s favorite band). First thing you can hear is guitars. Everything is pretty simple here. So simple that I immediately understood how it was played while listening. However, Yoshi and Toki use the standard E guitar tuning, where for 20 years nothing new has been invented. Bass - as usual, super-complex parts with interesting ideas. It should also be noted that the bassist is well heard in the mix and this is a nice detail. Rhythm section continues on drummer. There is quite an interesting combination of patterns, as well as high intensity. Even in areas where you can get by with a standard heavy metal drumming, you can hear the blast beat.

What can be said at the end? Aldious is not such skill level that one decision can spoil a large amount of work. However, last year between Yoshi and Miya there was something like a “who is better show off” competition. This led to poor results. First result is the hastily crafted EP Battle Against Damnation. Second is the release I'm talking about. But the release of Aldious released later - for this reason, you can still hear something interesting here. I will not long expound this thought. I just say that competition in the field of creativity - the idea is obviously a failure, and so it's not necessary to do so. Better to just do your own thing.
Автор: Митол Мастер на 8:34:00 PM